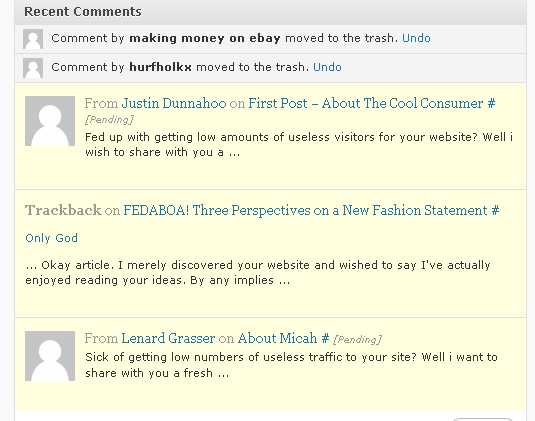 I hope spam comments are an indication that a website is getting traffic.  If it is, the The Cool Consumer is rolling!  We get spam comments all the time!  Mostly they’re those “tired of getting useless traffic on your website?” *uh, yeah* ones, or the ones who are all, “want to know how to make $5000 per day on the internet?” *for sho, fool!* and those are obviously spam.  My favorites are the ones who actually talk about the posts, while it’s obvious that they are posted by a bot and didn’t, in fact, read the post at all.

This one just came in on the “About Micah” page of TCC:

“Hey man, was just browsing by means of the world wide web searching for some information on this and came across your blog. I am very impressed by the info that you just have here. It shows how well you comprehend this. Bookmarked this page for further reading, will come back for more. btw,do you have any suggestions for weight loss options for children?”

If this was a real comment my response would be something like “feed them less.”  But since it isn’t, I decided to share this with you.

Another time, we got spam comments from this website called youngjeezylosemymind, saying that they didn’t understand the information put forth in the post.  Since that was on the “About Micah” page, and since Micah is the only one of any of us who had ever HEARD of Young Jeezy, that was pretty ironic and funny.  Incidentally, that youngjeezylosemymind website wanted me to login, play a game, and then it crashed my internet.  “Lose my mind” indeed.

That middle yellow one?  That “Only God” link, when you run your mouse over it, shows you that it goes to oneallah.net, which I am afraid to click on, because I fear that I will be put on some list that questions my patriotic nature or something.  The body of the comment says:

“Okay article. I merely discovered your website and wished to say I’ve actually enjoyed reading your ideas. By any implies I’ll be subscribing for your feed and I really hope you write-up yet again quickly….”

I did a site search to see what kind of content was on OneAllah, and here you go: 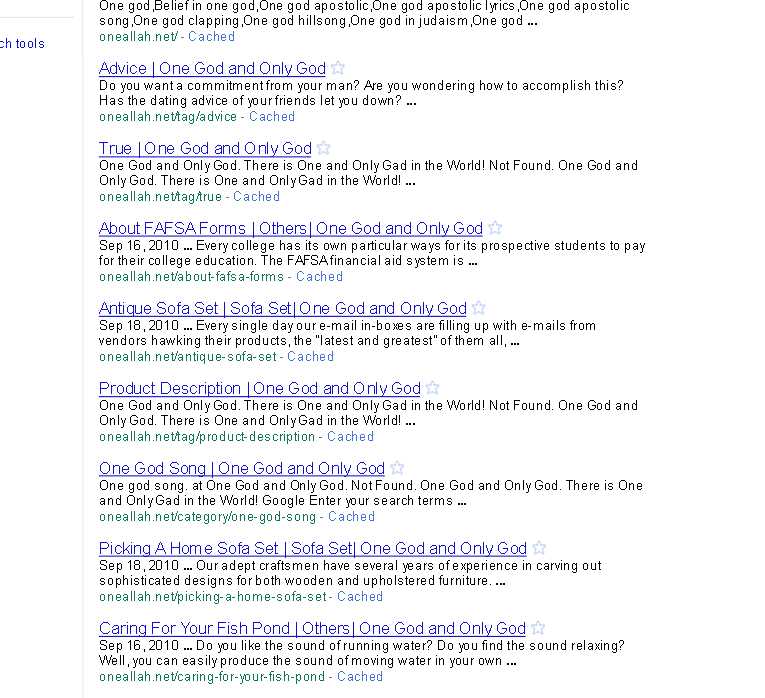 So, in addition to learning about someone’s opinion as to the one true God, you can learn how to care for your fish pond, and buy a sofa set, and get your man to stay with you.  I still didn’t go to the site.  I like having little mysteries in my life.

Now to my regularly scheduled panic about not getting enough work done.

This blog is sort of my baby.  It’s been around, in one form or another, since September of 2007.  So that’s three years.  That might not seem so long to you, but when I think about the things I’ve started and never finished, it seems like a really long time to me.

I have a one-third finished manuscript about war, the military, and my Dad that I’ll probably never finish.  Well, maybe I will.  I have this website – and the posts are seldom.  The more I learn about the internet, the more I learn that a “me” blog like this is pretty much never going to be picked up by anybody, never going to have a lot of traffic, and never going to make me any money.  So why keep at it?

Mainly, I didn’t start it to make money.  I started it because I had a corporate job that allowed very little creativity, I had nearly gotten fired for blogging on my MySpace blog, and I wanted a little corner of the Internet all to myself where I could work on my chosen craft and vent my frustrations, fears, mania, and other overly dramatic emotions.

So, mission accomplished, right?  I mean sure, I’m paying to host this site, so it would be nice if it made enough in ads or something to pay for that, but it doesn’t, and that is OK.  Ive got other things in the works that might take care of that for me.  And, they might not.  But at least, every day, I’m learning something.

And, at least, I have a place where I can say whatever I want and post ridiculous, poorly-drawn depictions of the AlligatorFishPig.. If you are one of the two people who reads this blog on a regular basis, and you totally miss my acerbic wit that is mixed ever so gently with my raw, emotional sensitivity (ha ha haaaaaaaaaaaaa!) you can read stuff I write other places:

And two dear, awesome friends of mine and me are working hard on The Cool Consumer, a product and services review site.

I’m also working on a thesis, a volume of short stories, and a huge independent website project on J.D. Salinger.  But I’m still going to take time to post stuff here, because this is MY place.  And I can talk about AlligatorFishPig all I want to.

And nobody else will let me talk about Shatner… 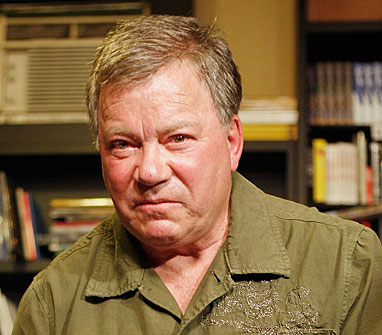 So, in answer to the question, “why write?”  Because I can.

As you learned on Monday, Mom and I have been doing a lot of travel this summer.  Dad’s in the Army, so we have gone to visit him, stopping in West Virginia on the way there or the way back.  Mom’s done it even more.  Last time, we learned out the trip to Elizabethtown, so now we’ll talk about Louisville for a spell. 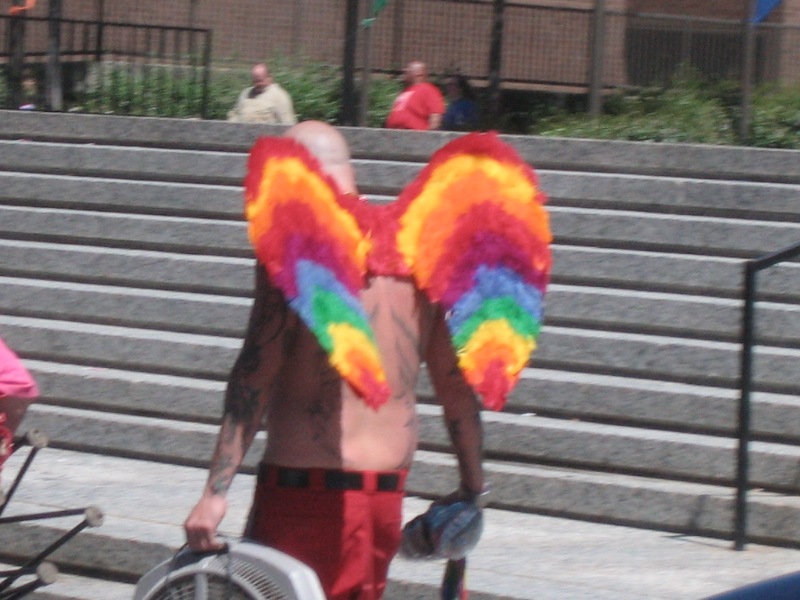 I didn’t know why this guy was wearing bright wings, but I was glad he was.  As it turns out, there was a Gay Pride festival this day.  I have lots of friends who are gay, so don’t take this the wrong way, but I was kind of cheesed off that the entrance to the festival was set up right at the entrance to the waterfront area.  So, you were expected to pay admission to the festival in order to just walk down to the waterfront for a minute.  That would irritate me no matter WHAT kind of festival it was.  I shouldn’t have to pay to see the stinky Ohio River. 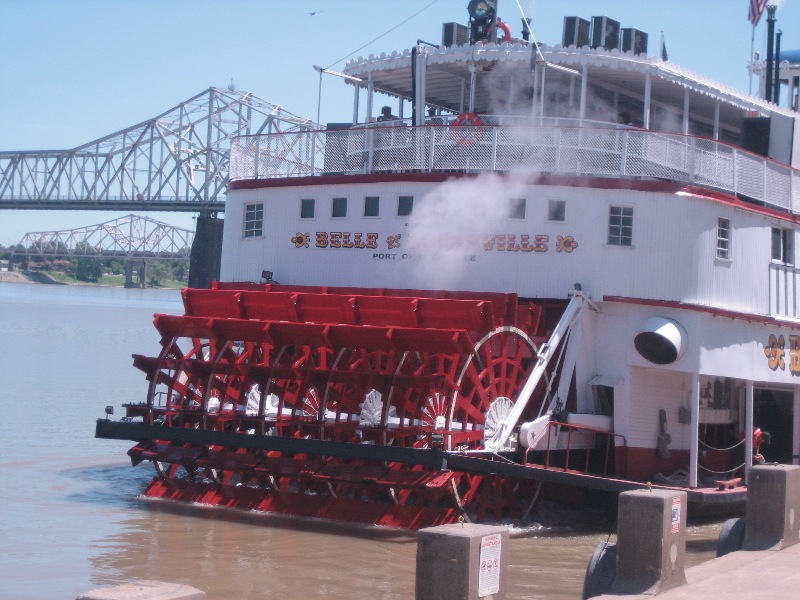 I persevered, and we found a spot where we could walk down near the water for free.  Here is a boat.  We didn’t ride on it. 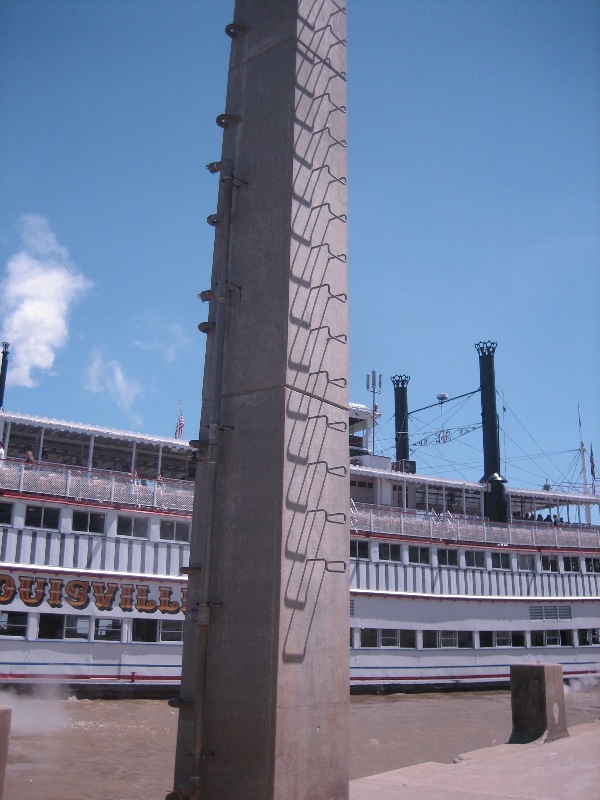 These are tall things with rungs – I assume so you can rope onto harbor (or whatever you call it) no matter of the height of the river. 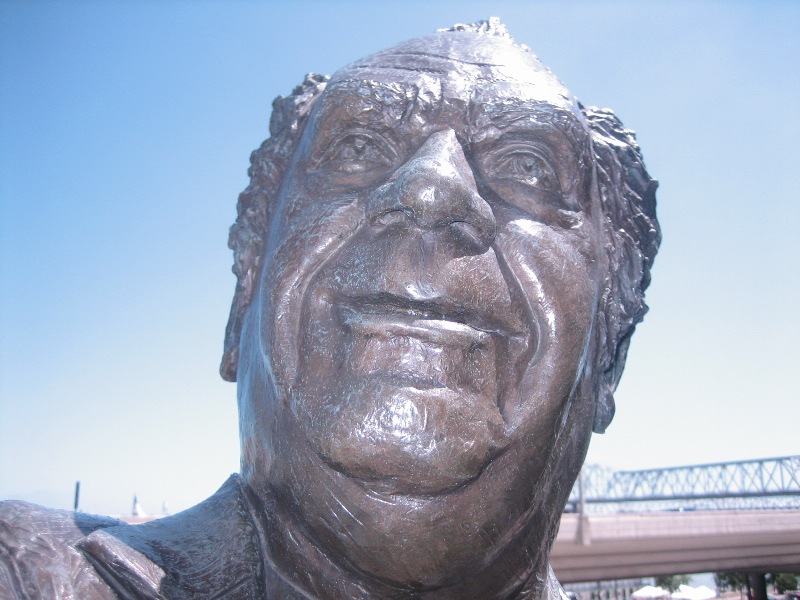 Meet Al.  He was hanging out near the boat. 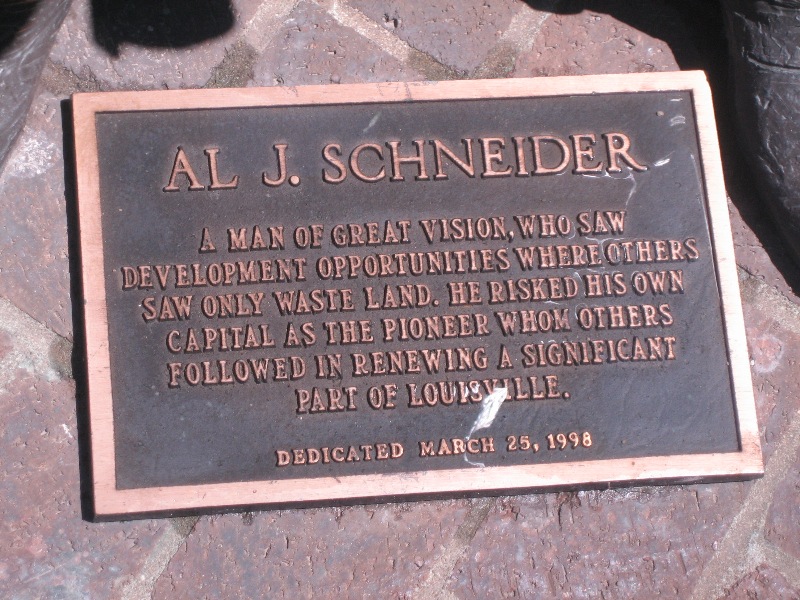 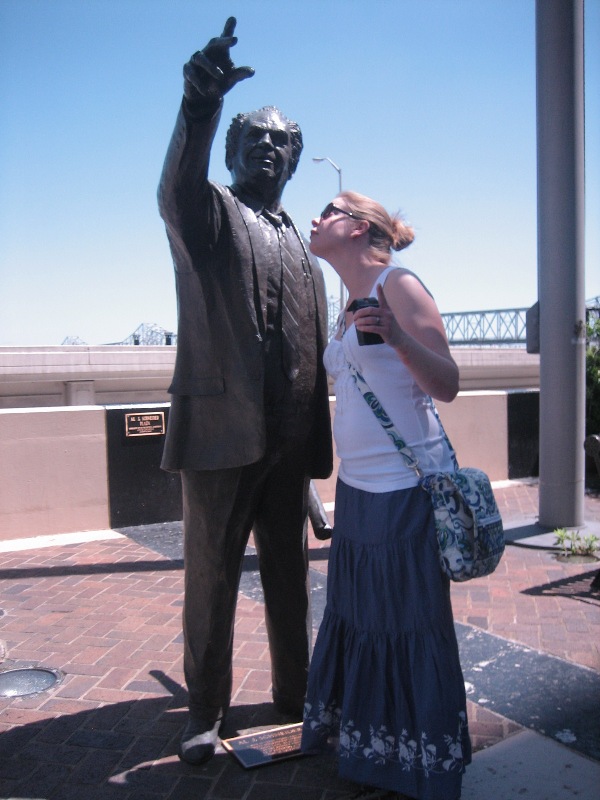 Al is a hard guy to figure out. 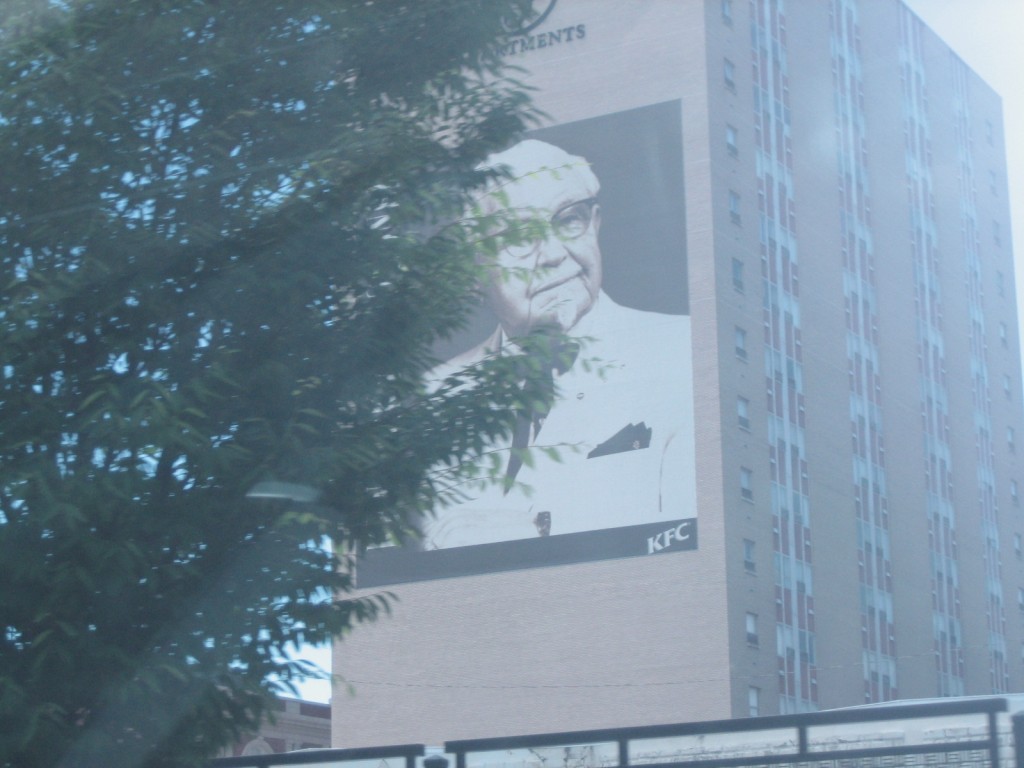 They have famous people’s faces on the sides of buildings.  More specifically, famous Louisvillians.  Here is…well…you know who. 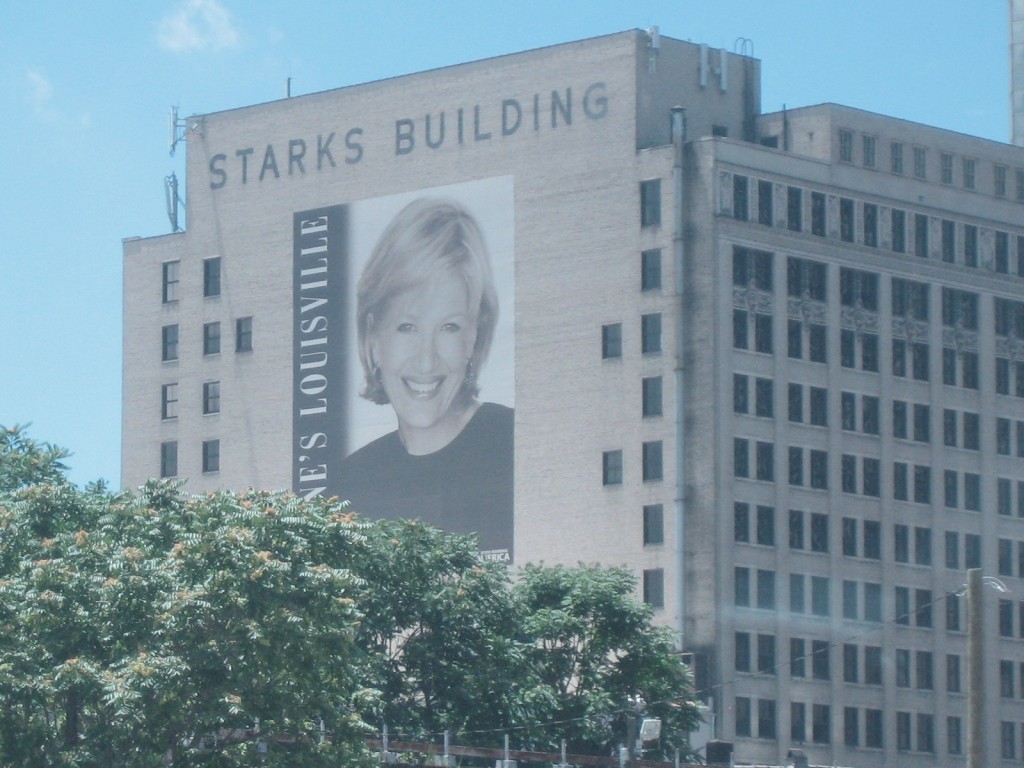 Diane Sawyer is also from Louisville.  You probably knew that if you’ve seen Drop Dead Gorgeous.  I met Diane Sawyer one time at the Rite Aid on the corner of Belvedere and Broad in downtown Richmond. She was picking up a few things before going to the Library of Virginia for some shindig.  She was super nice. 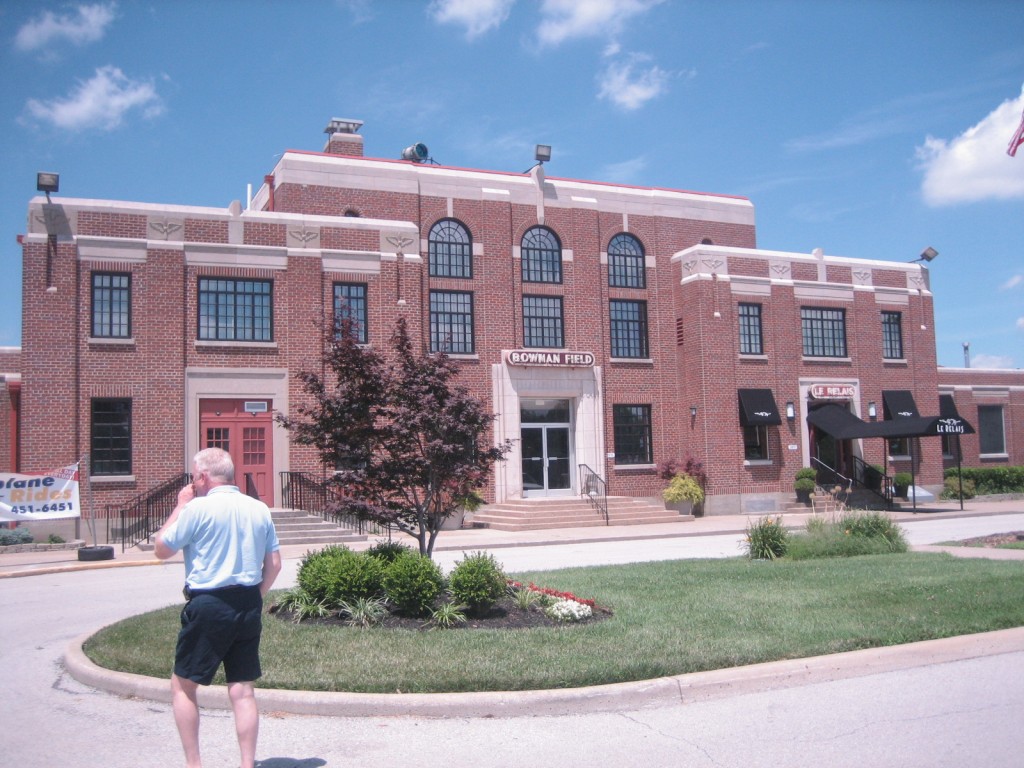 Bowman Field.  On this trip, Dad was scoping it out.  Now, on days off, he flies sometimes. 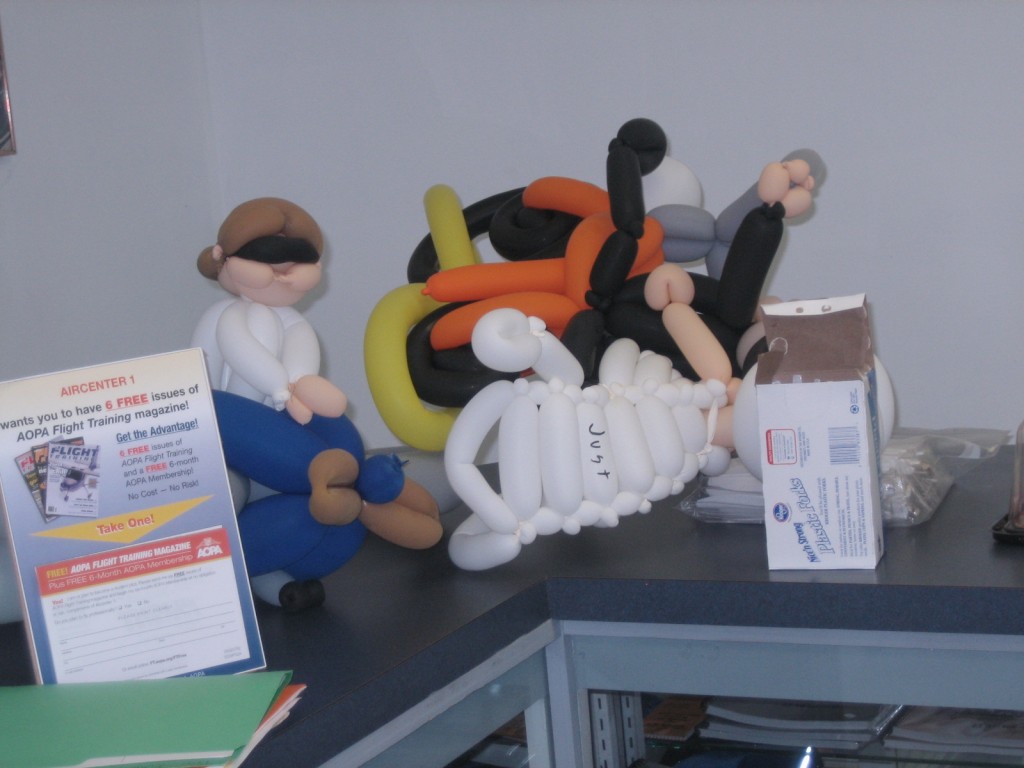 I took lots of other cool pictures of the historic airport.  It’s beautifully built – very 1920’s and I really dug it.  If you want to see ’em, you can ask me.  I thought that instead of beautiful architecture I would show you this bizarre balloon sculpture found in the pilot office.  Enjoy. 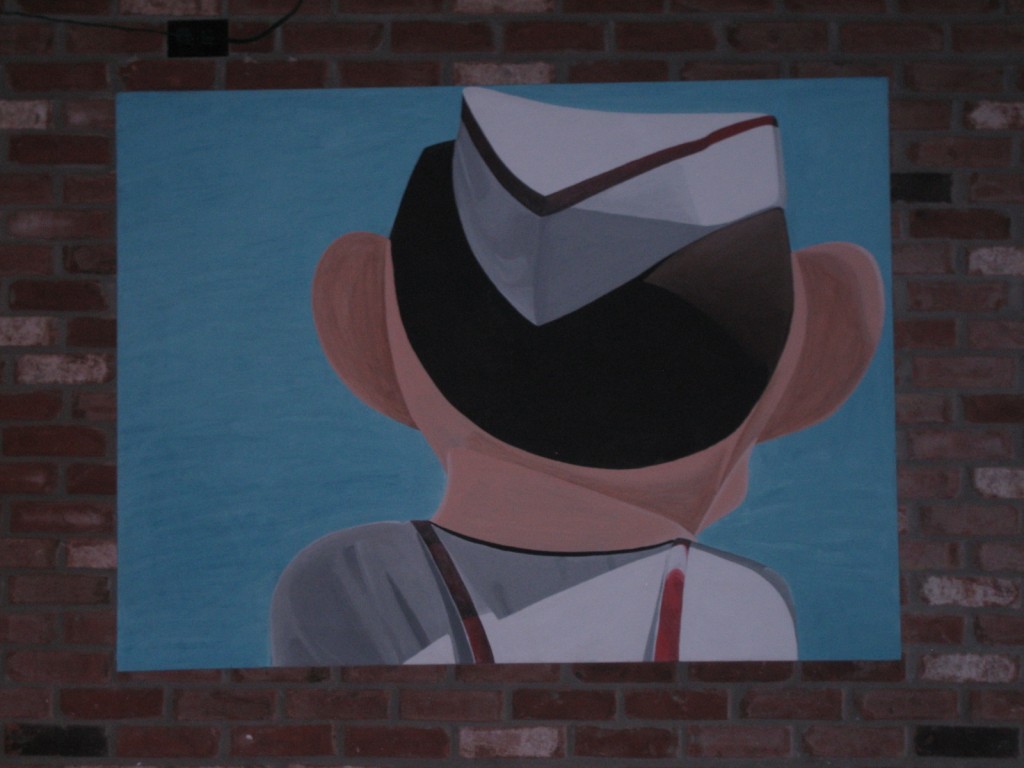 We went to this cute little place called Cafe Lu Lu for dinner, and I couldn’t stop staring at this painting.  I didn’t think to ask who painted it, but I totally want it. 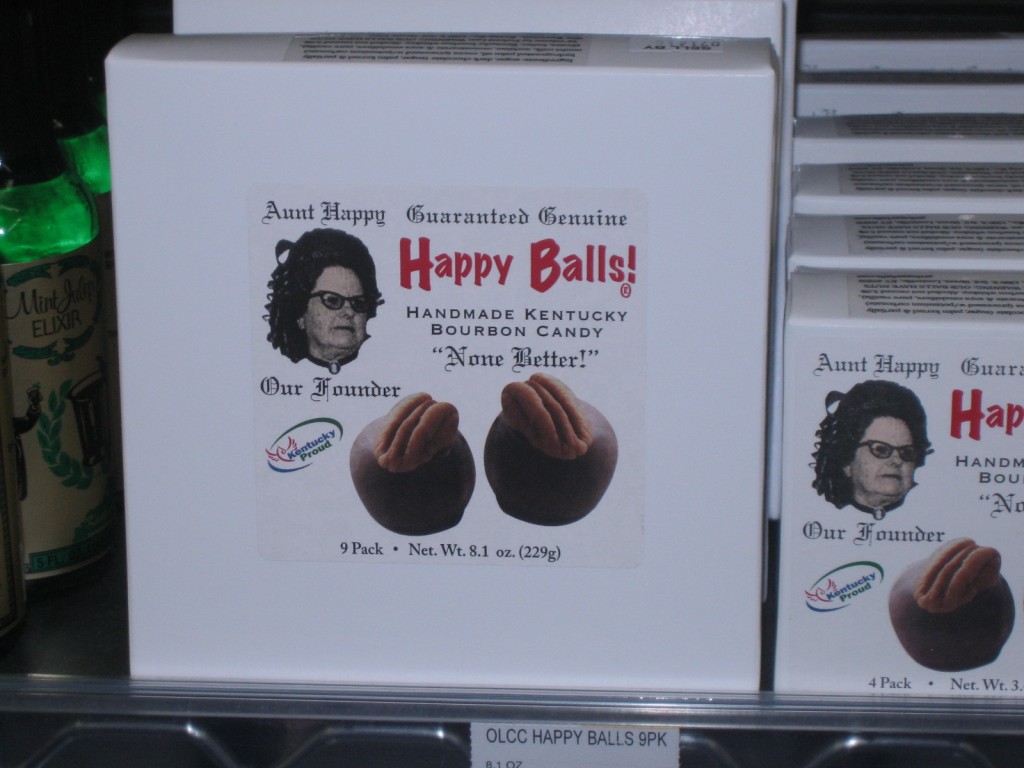 Thank God for Aunt Happy.  Actually, I didn’t buy these, nor did I taste one, but that’s some genius branding, that is.

So, that’s it for now.  Stay tuned for reflections of West By God Virginia.