On the surface, this might seem like a think piece on social media and social games. How social media has evolved and devolved to take us back to some sort of cyber grassroots state of loneliness and how we’re all just here to find a connection.

In November of last year, HootSuite published an infographic on “The Evolution of Social Media.” You can check it out here: http://blog.hootsuite.com/evolution-of-social-media-infographic/.

It traces 5 years of social media. 5. Granted, a lot has happened in the last 5 years. The amount of social media users is staggering. People are using social media to innovate, to change the world, to drive business, build brands and other Important Things.

They’re also using it to connect to other people.

When it really comes down to is, the Facebook and Twitter users that companies are trying to hook with compelling content and calls to action are people who, even though they may buy what the companies are selling, are maintaining their online community because it’s their COMMUNITY. The people they interact with are their friends, or at least they are sort of friends, and it becomes very important on a psychological and philosophical level.

This isn’t news. Since AOL launched in 1985, people have used computers to connect to one another. By 1997, they could chat with each other real time. Google was born in 1998 and by 2000 the dot com bubble went kablewy and people were already wondering about the future of the Internet. That was the first year that I, personally, started using the Internet with any frequency.

I know, right? Late bloomer for sure. In 2000, as Google announced that it had indexed over a billion pages, I was taking surveys on a site called emode.com. The first quiz I took was “What Type of Dog are You?” I was a Golden Retriever.

I didn’t realize it, but emode was a social networking site. Later owned by Tickle, Inc., Wikipedia says that they provided “self discovery and social networking services.” I slowly built a profile and made a few “friends” but didn’t accept any date invitations and never sent anyone any pictures. I actually met a friend on that site that I remain friends with to this day. I’ve never met him in person, but he was the one who typed “you should make a Friendster account. It’s fun.”

So I joined Friendster. The personality quizzes gave way to testimonials written by people who knew you in real life and who had known you on the Internet long enough to say something nice about you. You posted pictures of yourself. You looked up ex boyfriends and ex friends and long lost family members. Sometimes you found them.

I’d just gotten settled into Friendster when this same friend said “Hey, everyone’s moving over to MySpace.” I said I didn’t want to go over to MySpace. But those customization options were too tempting and I caved. You could post songs to your profile and change your background. You could pick who your “Top Friends” were (a pressure-filled task) and you could have your own blog. I started blogging there, almost lost a job over it in 2005, and this blog was born in its first Blogspot iteration soon after.

In January 2008, based on an invitation from the same friend who lovingly dragged me into every social media platform I’ve actively participated in (you know who you are :)), I joined Facebook. Since then I have shared probably way too much information (though not nearly as much as a lot of people I know), have watched friends go through breakups and heartbreak, have gone through the same thing myself, and have, on the balance, had a pretty good time on it.

My friends are generous with their likes and comments. They cheer me up most days. While it’s not like it used to be (what is?) it’s still a nice place to “be.”

Lately, Buzzfeed and Zimbio have had personality quizzes clogging up everyone’s feed. “What Game of Thrones Character Are You?” and “What Disney Princess Are You” have provided delight to some, a cause for disdain and complaint for others.

But today, I saw it. “What Kind of Dog Are You?” Social media, for me, has come full circle.

And, apparently I’m a Lab. 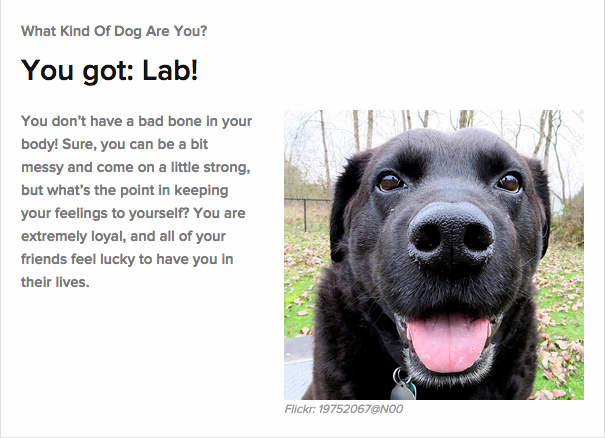 This is sort of a brain dump.

If the people I love knew how beautiful I think they are, they would be totally creeped out. I don’t mean it in a creepy way, I just think that when you love people it amplifies their beauty in your eyes. For me, it amps it up big time.

I have this one acquaintance with whom I have practically no interaction, but we are Facebook friends. He posts late night poems in his notes. Whenever I check Facebook in the morning and I see posts from him, I get really happy because he’s actually a pretty awesome poet. Kind of Ted Hughes-ish. It makes me happy when people have these talents. Because the guy is not a “I’m going to be a famous poet” guy, nor is he a “I went to grad school for poetry” guy. He’s a guy who does other stuff, but he writes these amazing poems.

I’m aware of the fact that my mind is busy constructing a new philosophy about the internet. It’s not ready yet, but when it is I think that it might change some of the work I do. It’s already changed a bit of what I was working on. I think it will change more. It’s funny. I think social media is kind of good. I know people who think it is a colossal waste of time and I get that. I wonder what other things I could have accomplished while I was checking Facebook, Twitter, Tumblr, Pinterest, G+ and the rest. I wonder about the time I’ve lost because Facebook was a gateway to certain online games that have sucked away time AND money. Then I realize that people like this one lady I know, Donna Highfill, who writes and is very, very funny are using the internet and social media in a  positive, good way. That she posts status updates that make me think, laugh and that is good. I’m all about using social media for that. Anyway, I’ve been thinking a lot about the internet. SEO especially. Ethics. PR. Stuff. So I’m aware that my mind is busy working through this problem and kind of irritated about it, since I have stuff to do, darn it.

I’m fascinated with this real estate thing. I’m working part time for a REALTOR (they make it all capitals for some reason) and I’m so blown away by the fact that people can do this for a living. The guy I’m working for is really good at it, so I’m learning a lot. It’s a complicated business but the needs and need fulfillment are simple. Somebody needs to buy a house. Somebody needs to sell a house. Help them. Get paid.

I forgot to schedule all the posts I’d worked up for my extended absence.  Drat!  Guess those’ll be posting any day now.  In the meantime, enjoy this not-viral YouTube video: