Saw the movie Couples Retreat, which totally renewed my love for Vince Vaughn.  I loved him in Swingers.  I loved him in The Wedding Crashers.  I didn’t love him in Four Christmases or Fred Claus or in The Break-Up.  I didn’t expect much from Couples Retreat, though I loved to see Vince paired up with John Favreau (who, to me, doesn’t get any better than “Gunner” in PCU, though I think he’s a fine director (Elf, what?). 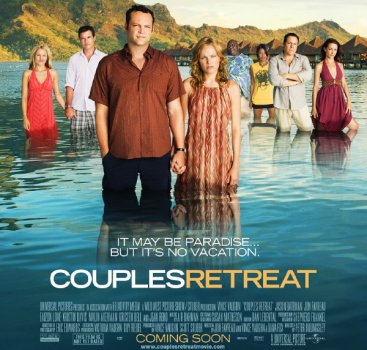 So anyway, Couple Retreat.  Jason Bateman and Kristen Bell are a married couple having trouble conceiving a child.  They ask their best friends – Vince Vaughn and Malin Akerman (who I didn’t hate in this, even though I hated her in 27 Dresses – though you were supposed to) are a married couple with two kids, Jon Favreau and Kristin Davis are a married couple who pretty much hate each other with an 18-year old kid, and Faizon Love (adorable!) is a recently divorced guy who’s dating a 20-year-old who calls him “Daddy” – to go to a couple’s retreat called “Eden.”  The only way Kristen Bell and Jason Bateman can afford it is if they take the package deal, so all their friends have to go too.

Hilarity ensues.  SPOILER ALERT! They all live happily ever after.

Nice to see Jean Reno in a totally ridiculous role as the head of the resort – a touchy feely place that has all these couples exercises to make the people reconnect with their mates.  Peter Serafinowicz was a scene-stealer as Sctanley – an anal-retentive guy who has an epic Guitar Hero face-off with Vince Vaughn’s character.  And yes, by epic I mean WTH?

All and all, if it comes on TV go ahead and watch it.

**Funny enough, on IMDB it says that Vince Vaughn went to high school with Dave Eggers.  Lurrve him.