Some of these photos also appear on Facebook, but I don’t care, and neither should you.  Mom and I went to Louisville to visit Dad at the Army, and to Culloden/Hurricane to visit aunts and uncles.  We took this trip two times – once in June and once in July, and then Mom did it again in August.  Twice.  We’ve put a lot of miles on her car.  We’re leaving Tuesday for Poplar Grove/Rockford IL to visit my cousin, who is undergoing heavy-duty medical treatment.  We plan to spoil her with gifts and good humor.  So, here are some highlights of Louisville and West Virginia, along with my sparkling commentary. Part I – Elizabethtown, Kentucky: 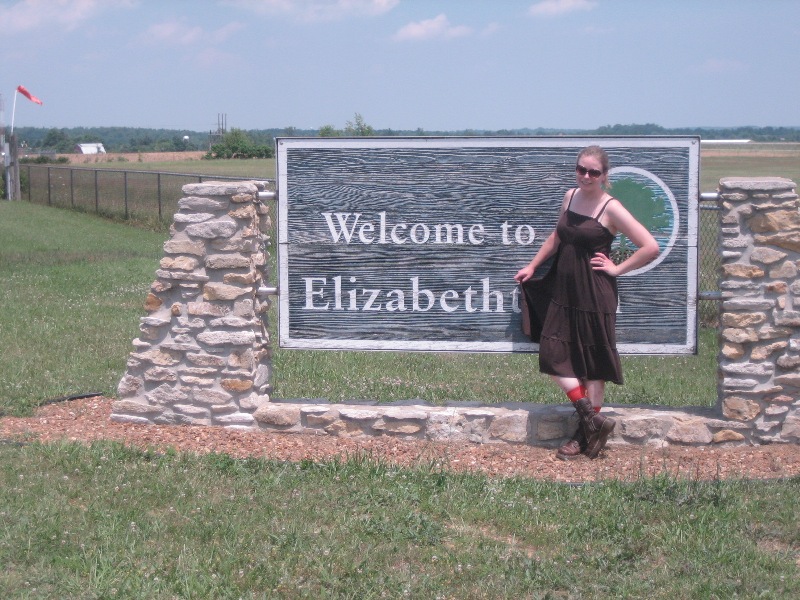 Dad technically lives in Louisville, but we went to Elizabethtown, Kentucky for a while one day.  This photo was Dad’s idea.  He’s a clever dude.  This was right outside the airport in E Town where we saw this: 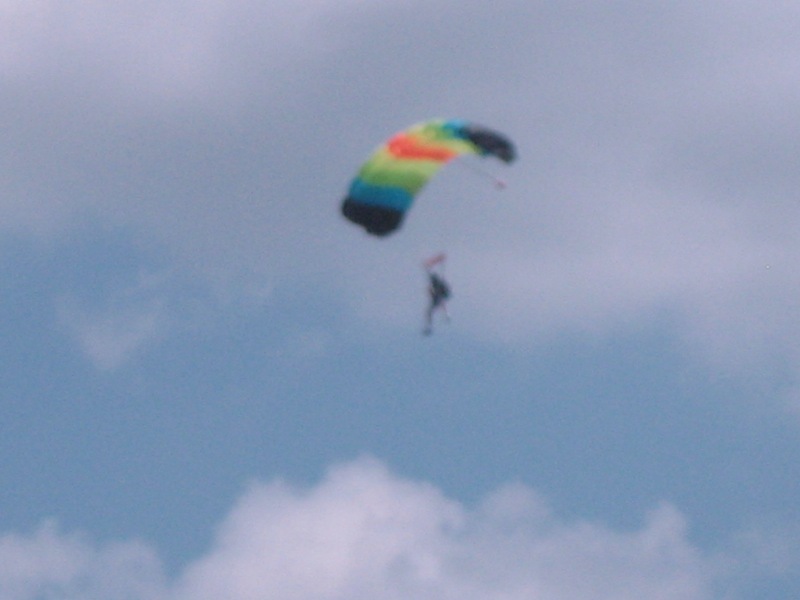 I know the picture’s kinda fuzzy, but you get the idea.  I so want to do this.  Unfortunately, skydiving costs money and courage in the form of a total lack of fear of jumping out of a FREAKING AIRPLANE, so I imagine this will be a bucket list item only completed upon the news that I am terminally ill or independently wealthy.  Let’s hope for the latter, shall we?

The people who were jumping were part of this organizaton: 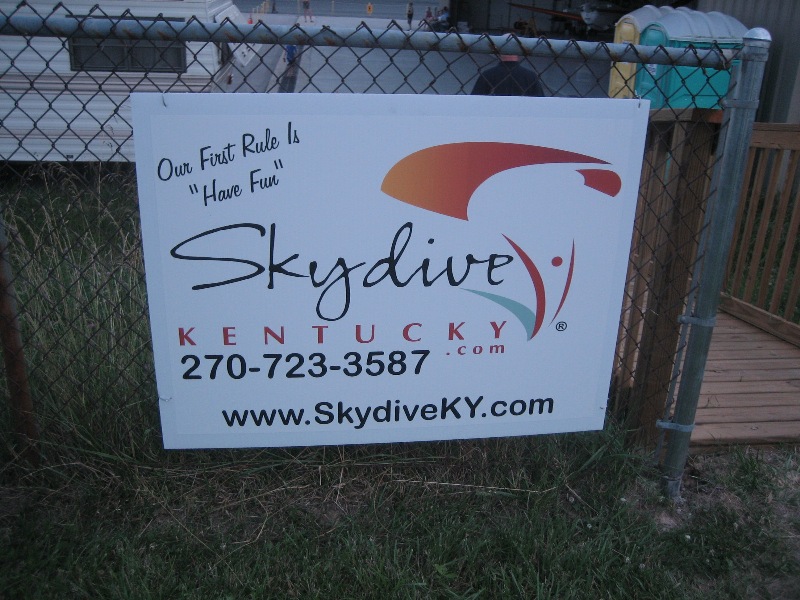 If you’re ever in Elizabethtown and can manage to find the airport (it’s a challenge), these are the people to talk to if you want to skydive.

We ate at this place: 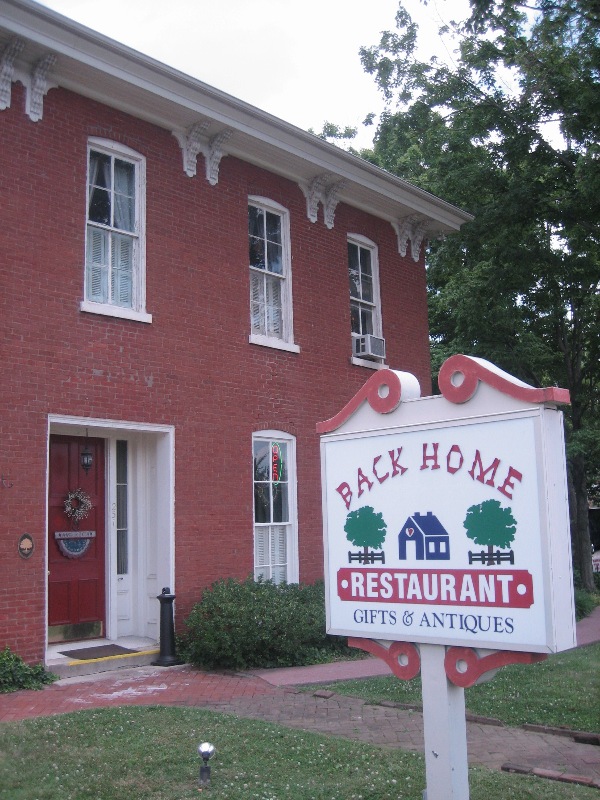 I didn’t have high expectations.  I don’t know why.  Maybe it’s because I’d eaten some crappy food from elsewhere, or something like that.  This was super-delicious.  The restaurant is also a crafts and home decoration shop.  It started out as the latter, but as women would come to shop men would be bored, so they started serving coffee and tea and cakes and stuff.  The men got hungrier, so they started selling pinto beans and other stick-t0-your-ribs kind of food.  Now it’s a full-fledged restaurant that serves Southern Soul Food (capitalization intentional) prepared using family recipes. 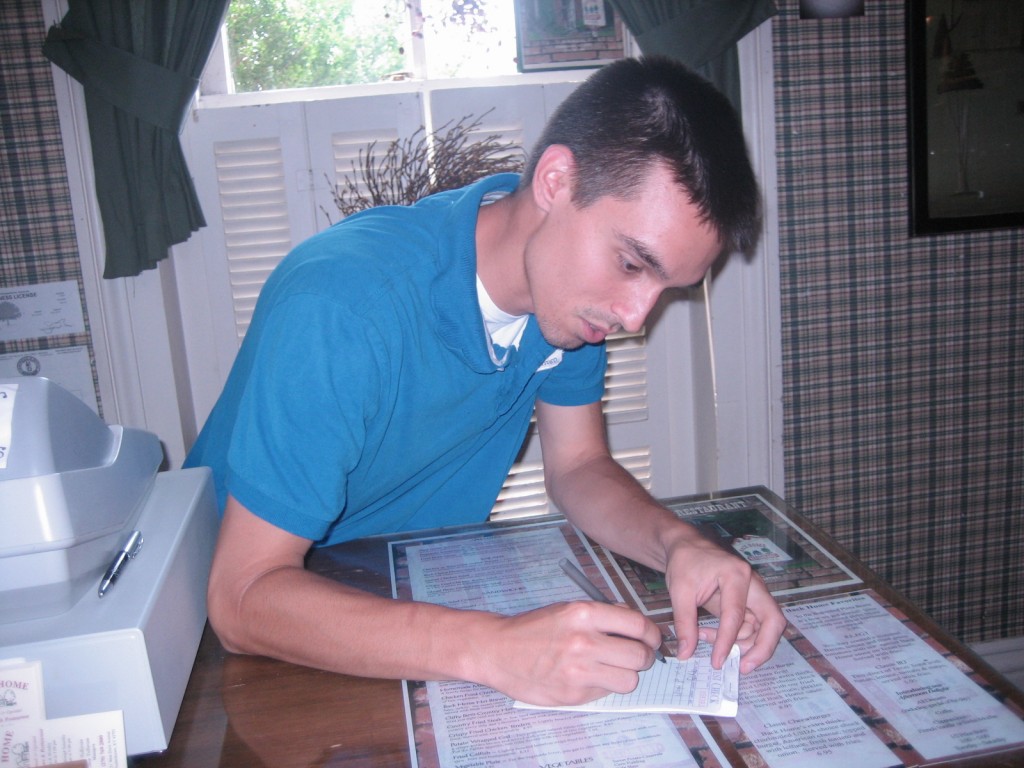 This is a member of the family, sharing with me the recipe for their hashbrown casserole, which differs from The Cracker Barrel’s recipe.  I’m not sharing either, because I have grand plans to combine both recipes into the Most Delicious Hashbrown Casserole Ever.