I know, I know.  It’s been a while.  It’s been snowing like we’re in New England or something, plus there have been boxes to move (long story – I didn’t move) and work to do and a new semester of grad school to start and WHEW!  It’s exhausting being a massive underachiever.  Underachiever because I don’t feel like I have a handle on anything PER SE, but I’m doing OK.  See?  It’s OK.  I’m not doing GRAND, mainly because I hate winter and because grad school is hard and because I’m not excelling in everything I do and touch.

But enough about me!  Let’s talk about my dog.  He’s adjusting to a new companion.  My parents’ dog Bailey came to live with us for a little while.  She’s about twice Jake’s size and three times his age.  They are getting along, however.  How could they not?  Look at that face! 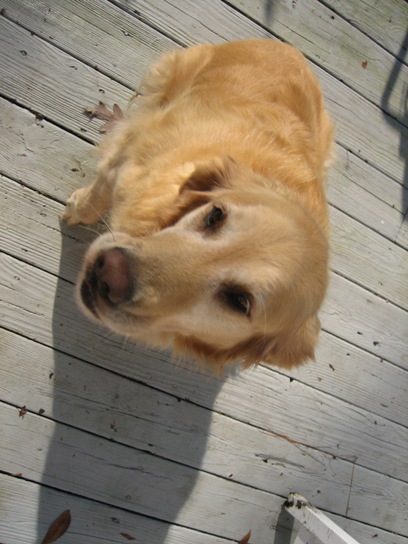 They are still getting used to each other, so I don’t have any hilarious videos of them playing yet, but they do some funny stuff.  I’ll save that for another post.

Since it had been since December since I visited my own website (for shame!) I decided to weed out the spam comments, since I can’t figure out how to turn my Askimet on (Blog Daddy, help me!), and I came across some fun ones.

from penislargementy.com
“Brim over I to but I dream the post should acquire more info then it has.”

–Had I know for to your comment earlier may have deleted some.

–guess it’s hard times for the Granville Police.  Actually, it’s a real website, for a police force in a town called Granville, MA.  I’m sure some hacking is involved here, though their site is a little weird.  Not at all government-y.  Maybe a fake?  Who knows.

–again, either the Koch family has fallen on hard times, unless their site got hacked or whatever.  Because I doubt they want to use pictures of their kids hanging Christmas ornaments to sell valium or whatever.  **Incidentally – I realize that “Hacked” is an antiquated term or whatever and I don’t care.  Correct me if you want to.  At least THAT would be a legitimate comment.

–this is a really lame business tactic.  This is not a forum, nor is it an environment.  It is more like a dry and desolate desert, akin to something out of The Gunslinger, where you expect to see tumbleweeds at any time.  That’s my fault.  I’m just sayin.’

–Soul. Pitch.  Hustle.  That’s the most awesome name for a website ever.  I just don’t know why the website that calls itself “Da Urban Vehicle for Straight Raw Gritty Newz. From the Streetz to the Boardroom! ~It’s More Than A Lifestyle~” would want to sell me insurance.  Is this more of that internet tampering I’ve been hearing so much about?

paydaytown.com
The writer of www.notalwaysaboutmonkeys.com has written a superior article. I got your point and there is nothing to argue about. It is like the following universal truth that you can not disagree with: triangular sandwiches always taste better I will be back.

–this is a payday loan site.  It just gave me this funny mental image of a person standing in front of their fridge with their hands on their hips, saying “There’s no food in here!” and someone else saying, “Hold on a minute, let me go down to Payday Town to get some money.”  And then a song plays.  I do agree, however, that triangular sandwiches taste better.

genericwpthemes.com
Good post and this post helped me alot on my college assignment.  Say thank you for as your information.
(on kid stuck behind the couch post)

–if my personal opinion helped out some weird computer bug that had a college assignment about the “Kid Behind the Couch” post that went viral, OK by me.  Generic WP.  Whatevs.

largehamstercage.org
thanks, very useful information.  I have been looking for something like this for a long time.

–this comment was deposited on my review of “Harvard Man,” so I very much doubt that a real live person at LargeHamsterCage (which is actually a business that sells large hamster cages – with the tubes for the hamsters to run through and stuff) was surfing the old web and really needed my insights on a weirdo straight-to-DVD POS starring the guy from Entourage.

That’s all I’ve got for tonight, Folks.  I have ten pages of prose to polish, a ton of reading to do, and lots and lots of work to do.

One thought on “Oh, Internet”