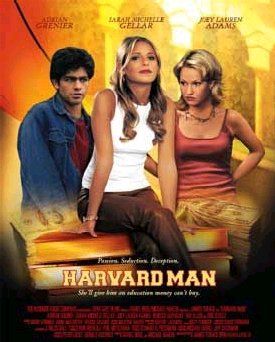 I picked this movie up at Tuesday Morning for about $3.  I’m not going to lie, I bought it because it has SMG (now Prinze) in it, and I also really like Joey Lauren Adams.  The rest of the cast wasn’t too shabby, either.  Adrian Grenier (of Entourage fame), Eric Stoltz (one of my favorites), and Gianni Russo (The Godfather).  The thing is, though, is that this movie sucked a lot.

The story centers on Grenier’s character, Alan, who is a Harvard basketball player whose parents’ house was  swept up in a tornado (ala Wizard of Oz, one would suppose, and in Kansas, no less) and he needs to find $100K to help them out.  So of course he turns to Sarah Michelle Gellar’s character, Cindy, whose father (Russo) is a gangster.  Joey Lauren Adams plays his Philosophy professor.  He’s sleeping with both of them.  The sex scenes are pretty graphic, if you like that kind of thing.

This movie tried pretty hard to be edgy, but it wasn’t.  The dialogue was lame, the plot was convoluted and boring, and the camera work was that annoying stop/start flashing-type stuff that only really works in horror movies or David Lynch films.  Alan takes a bunch of acid (which he’s been warned about, even though this is the early 2000’s for Pete’s sake) and has wonky visuals that are evocative of the visual effects of 1998’s Fear and Loathing in Las Vegas, but not near as cool.

All in all, skip this.  If you’re dying to see it, email me and I’ll send you my copy.  Because I won’t be watching it again.