Halloween was last weekend, and for the first time in a long time me and The Hubs went out. We actually went to a wedding Saturday afternoon (a costume wedding – what a neat idea, yeah?) and ate some grilled cheeses with our dear friend The Swisher and then all got ready for a night out on the town.

The plan was to go to Gallery 5, a local art gallery (and so much more) located in Jackson Ward. So that’s what we did. I got my Tarot cards read by a women who seriously had no energy left to give a crap and saw a band that rocked my face off.   Apparently they’ve been around for three years, so I’ve obviously been living under a rock.  I’m probably going to write them up on the other blog I write (for work) so keep an eye out there.

I already put our costume pictures up on Facebook, so I won’t bore you with them here  (since I’m friends with both my readers on Facebook – hi guys!) and I’m sure some other people out there managed to get pictures of the event that don’t look like they were taken by a three year old.   In fact, this person has pictures on Flickr even as we speak.

I can’t believe it’s Thursday already.  I’m behind on everything – from laundry to scholarly pursuits, but I thought I’d take a minute to put SOMETHING here now that I’m actually on the interwebs for real.  No more training wheels.

I realize it’s been forever since I posted anything about Emma, so here is a little story in pictures you might enjoy – featuring our favorite four-year-old. 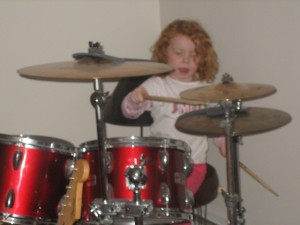 It’s funny, because most pictures of drummers are usually the same.  They are just sitting there, behind those drums, rocking out.  That’s what Emma’s doing here.  She’s rocking out. 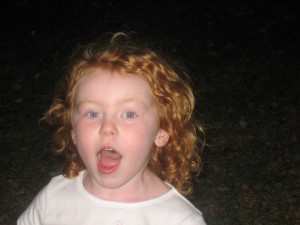 When she’s rocked quite enough we went outside for some general running around and going crazy.  This is Emma roaring mightily.  She kept yelling “What?!?!” ala Lil’ John, which I understand is something her parents taught her years ago. 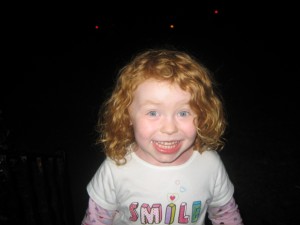 Give a kid a bunch of candy and juice and they’ll keep you entertained for hours.  Not that we did that…much. 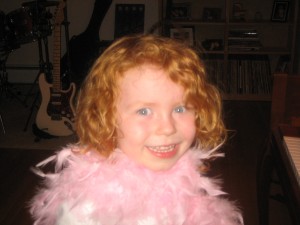 **a note about “favorites”.  The Illustrious Father of Emma told us a little story wherein he, Emma, and several other folks were at the beach for vacation.  Emma asked a friend of the family if she would carry her down to the water.  The friend of the family replied that Emma was perfectly capable of walking herself, and Emma said that she was fully aware of that, she would just prefer to be carried.  The friend of the family asked, “Why?  Why do you want me to carry you?” To which Emma replied, “Because you’re my favorite.”  Sneaky, clever, and totally effective, of course.  We all try to be Emma’s favorite every time we see her.  I’m convinced this will turn her into a great lobbyist or movie star, and hopefully not a cult leader.

So, now that you’ve been hit by that tidal wave of adorableness, I will bid you adieu.  I’m off to find interesting pictures and stories to share with you.  After I finish the mountain of schoolwork and workwork I need to do.