Monkey Poop – Or Why This Blog is Sometimes About Monkeys

I had a really weird dream about two months ago, or whenever I started this post the first time – February 22…so I had the dream the night of February 21st.  Wow.  Time flies.  I remember thinking, “I can’t go and have a dream about monkey poop and NOT blog about it.  That would be crazy.  The name of my blog is ‘not always about monkeys,’ which implies that it SOMETIMES is about monkeys, and this should be one of those times.”

My dear friend Steven is a wonderful artist, and I couldn’t help but think that blogging this would be much easier if he would just draw the pictures for me, but he works eleventy ten jobs and so do I, so I’ll make do with what I can find on flickr.  So here it is, my Monkey Poop dream.

There is a party in my back yard.  There is a nice patio out there (not like now, where there is mud out there and not a patio) and lots of people are there.  We’re all there to talk about some important stuff about politics, but I don’t know anything about politics, so I feel  uncomfortable and when it is my turn to talk I turn all red and excuse myself, because my monkey is missing.

This is the coolest part of the dream, is that I have a monkey companion (not just a pet, mind you, but one who helps me solve mysteries and problems ala Dora the Explorer but MY monkey isn’t an idiot) and his name is Spider.  Spider the monkey.  He’s not a “spider monkey,” he’s a “squirrel monkey” and he talks to me. 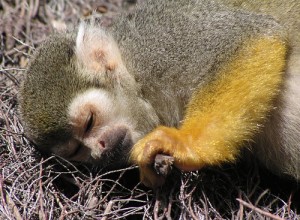 So, red-faced and embarrassed, I start walking away from the patio where everyone is saying very smart things about politics, and Spider appears from behind a bush and frowns at me, making a *tsk* sound.  He only talks to me, so he wants me to go inside the house so he can say something to me.

All of the sudden, though, my house isn’t my house.  It’s a school and it smells like a school.  Spider comments on this smell as we stroll inside, find an empty classroom, and sit down.  He talks me through my insecurities about my political acuity, and all of the sudden a bunch of people file in, sit in the brightly colored chairs, and start telling knock-knock jokes, one after the other.

Spider whispers some zingers to me, and I start saying them.  They are a big hit with the crowd.  Spider knows some killer knock-knock jokes.  He’s laughing his weird little monkey laugh, and off the sudden he jumps up onto my shoulder (fingernails scratching the HECK out of me) and laughs even more.  I feel these soft, warm balls of stuff roll down my back into the back of my bathing suit bottom (I DID mention that everyone was wearing bathing suits, right?  No?  Well, we were) and I have the sneaking suspicion that Spider just shat down by back. 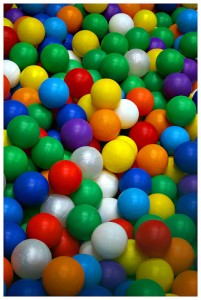 the balls were round, like this, but not multi-colored and much smaller than this - photo by Waka Jawaka

I get up and start running for the bathroom, which is, of course, a huge industrial-type bathroom that’s a mix between the bathroom in Saw and a high school locker room.  I go into a stall, shut the door, and try to scoop Spider’s damn monkey poop out of my drawers.  No mas.  It’s smearing everywhere.  I have to take off my bathing suit, but all I have to wear is this clear plastic miniskirt ala Tank Girl and that’s not going to be appropriate.  I check to make sure the coast is clear, run to a shower, clean myself off, and wrap myself completely in paper towels.

Then I wake up.  The end.  Stupid Spider.